No-one in the Council will answer the question or will agree that the  enclosure or shed is nearly 3m taller than the approved plan – see more Evasions and Denials. The response below needs to go in at about 60.
Page 3 is currently being revised. MD 25-Oct-20

If you wish to seek legal advice your legal representative should contact our Legal Department as advise previously. I will not be forwarding on your email or drawings as they remain the subject or your historic complaint (the emails and drawings are evidence that the Council have mislead the Ombudsman). If you are unhappy with the Ombudsman’s investigation of your complaint you should raise that with them directly (I had already raised the issue with the Ombudsman and they said my complaint remains the same and the Council should have known this).

I have attached a copy of the letter sent to your regarding your breach of the contact restrictions placed on you in 2016, (the complaint that they had given misinformation to the Ombudsman was not registered and my referral to the Customer Advocacy/Legal Section was passed back to the person misusing  Section F of code dealing with unreasonable and persistent complainants)*  please note that we intend to further restrict contact with the Council as advised following the 17 further contacts, mainly regarding the boatshed dimensions and allegations of the Council misleading the Ombudsman(who’s counting). We have attempted to prevent this further restriction by filing and not acknowledging your emails, however the tone of your emails and the allegations contained in them are unacceptable and due to this, any further emails attempting to raise the historic complaint issues will result in an immediate referral to block your email address to prevent further email contacts. All correspondence with the Council would therefore need to be in writing or by telephone.

* The first and only complaint about South Tyneside Council abusing the services of the Local Government Ombudsman is hardly persistent and it is entirely reasonable when the fact that the shed is actually built 3m higher than  permitted is considered – the height at the river end is 18.2m and the authorised plans from 1996 say it should be 15.5m.

Dear Councillor Anglin.
Please see letter attached. I have used this format because of the large number of references used.
The trouble with the Council is that they can say what ever they want without any evidence about the existing slipway cover (shed) and they are believed. If I and other residents say something to the contrary e.g. it is 3m too high, and provide evidence and we are not believed. There is something rotten in the borough.
The extra set of footings were very obvious once the frames were up in September 2013 and the Council still did nothing. All plans of 1996, whether approved or not, give an overall length of 22m not 27.5m. None of them show 6 frames.
There have been suggestions for a way forward, which include involving the relevant Secretary of State, going to the press and involving the police but I think it probably best to properly involve our MP but please let me know quickly which side you and your fellow Councillors are on as UK Docks are currently preparing to extend the shed and the permission for that was gained by deceit (the planning Committee were told the existing structure was built within the permitted height).
I can go into far more detail if you have not been convinced that the existing shed or cover has no permission for its current height but I hope that will not be necessary.
Yours sincerely,
Michael Dawson

Cllr Anglin does not respond but forwards his email the to the very people who are responsible for the inappropriately sited shipyard.

From: Alison Hoy on behalf of Customer Advocates
Sent: 11 August 2017 11:31
To: Michael Dawson
Cc: Cllr John Anglin
Subject: RE: Extension of UK Dock’s Slipway Cover, River Drive
Dear Mr Dawson
Your email to Cllr Anglin has been forwarded to our team in line with your current contact restrictions regarding issues raised regarding the UK Docks boat shed.
I must advise you that this letter is raising your historic complaint again which has been thoroughly investigated by the Council and the Local Government Ombudsman, therefore will be placed on file.
Regarding your comments regarding the additional boat shed, this was subject to a separate planning application and the Council’s planning department advise that past issues do not affect the validity of any new planning applications. Following the standard planning process, planning permission was granted on 1 February 2016 for the additional work. There is nothing for the Council to add on that matter as this does not raise any new issues for Planning. 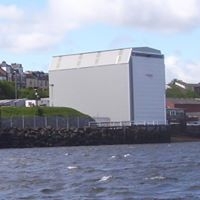 Dear You and Yours,
I listened with interest to your article about the Ombudsman on Monday 13th November and realised that while they have no real teeth because they cannot enforce their recommendations, their authority can be misused by Councils to cover up irregularities the way that complaints are handled.
Allow me to explain:
I complained to the Local Government Ombudsman (LGO) about the way South Tyneside Council had handled my complaint about a shipyard shed that had been built higher than planned but the Council misrepresented or misinformed the Ombudsman about the drawings I presented and the Inspector naturally found for the Council and my complaint was not upheld.
The Council then used the findings of the Ombudsman to mislead the MP for Northumberland about mine and other residents case but what is especially galling is the language used by the Council and in particular the word ‘allegation’ which implies I and the other residents were lying when it is the Council who was misleading the Ombudsman. END_OF_DOCUMENT_TOKEN_TO_BE_REPLACED

When we were trying and failing to get information about the planned height of UK Dock’s slipway cover out of the Council, a few of us suggested that we get the Tyne Gateway Assn (TGA) involved and an AGM was convened because it had gone dormant. The main item on the agenda was the suspected breach of planning control with regard to the height and width of  the cover. 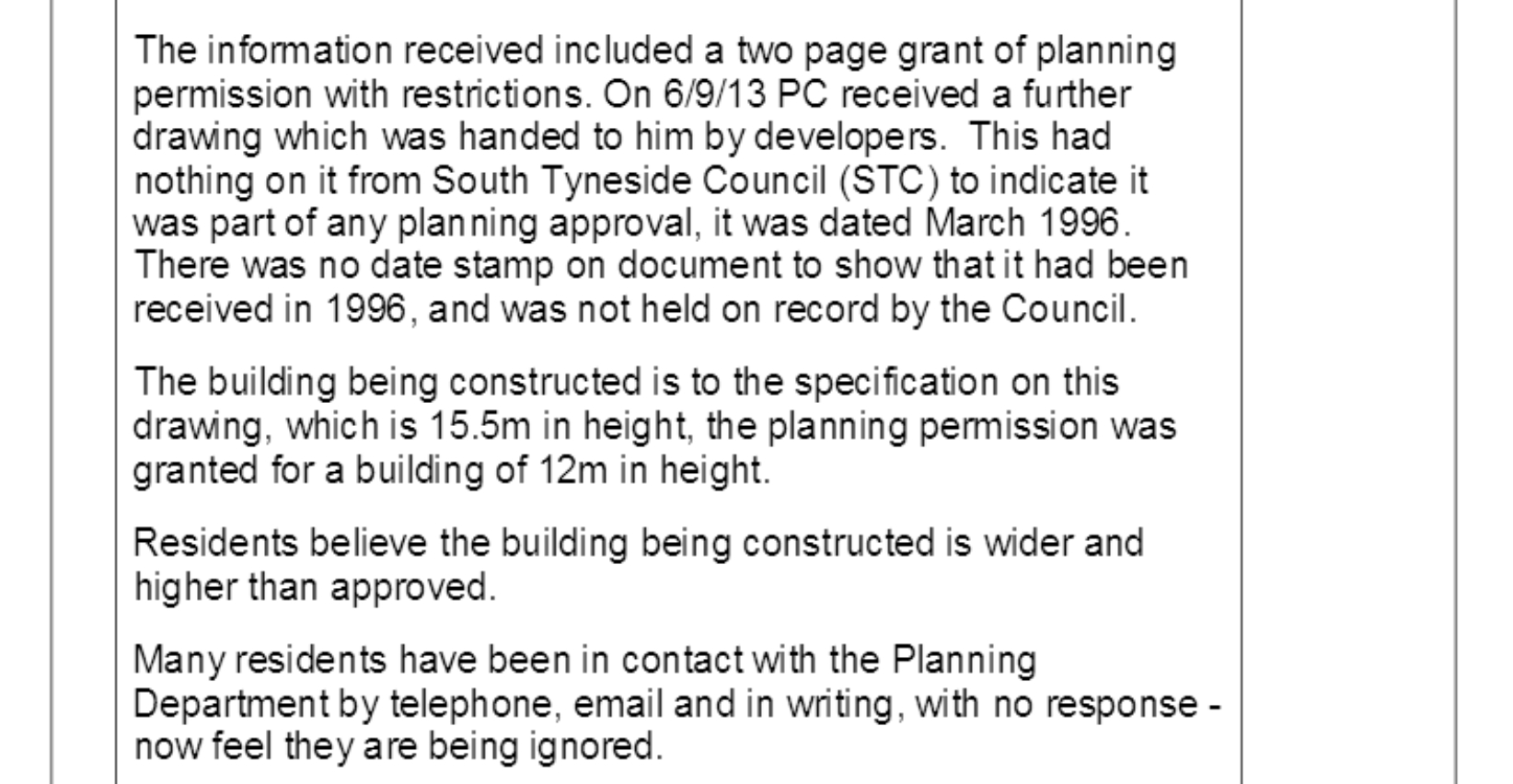 The minutes are not clear but the dimensions are from the first drawing and the further drawing was amendment from February 1997 and therefore could not have been stamped in 1996. It also shows both ends of the cover or enclosure to be 15.5m high so it can be interpreted in two ways.*
I thought that the Chairman would stand down because of his business interests, being a procurement officer for HB Hydraulics but he did not and to compound things one of it’s directors, became Treasurer. Thus control of the TGA passed from the Residents to a business dependent on the goodwill of the shipyards on the Tyne. END_OF_DOCUMENT_TOKEN_TO_BE_REPLACED

This is zero on the list of methods or devices used by the Council to corrupt the complaints procedure. It is used to kill off any valid complaint at birth complaint that the Council do no wish to handle. Its use is universal when any complaint is made against any inappropriate development in which the Council is vested and with more consequence it is used to cover over any administrative irregularities.

Example 1: Sunday working by UK Docks on River Drive.
This is head of the list because of it’s simplicity. The Planning Officer responsible did not acknowledge the breach of planning, he gave Customer Advocacy two items of misinformation and left them to respond: END_OF_DOCUMENT_TOKEN_TO_BE_REPLACED

No 3 on the list of abuses of the Council’s use of the Complaints Procedure and is the way that they say that a complaint about a complaint has been handled is the same as the complaint itself.

I wrote to the Chief Executive complaining about them misinforming the LGO and received a letter from his Corporate Lead stating:
Thank you for your letter to Martin Swales, Chief Executive dated 8 July 2016, requesting matters related to your previous complaint to be raised as a new complaint, I manage the process and staff that support customer complaints and compliments. Your letter has therefore been forwarded to me to consider and respond.
She then goes on to say:
There is no evidence to suggest that there has been deliberate misinformation provided by Council officers to the Local Government Ombudsman.
Misinformation is false information that is simply wrong irrespective of whether it is deliberate or accidental, a genuine mistake or criminal incompetence. In view of the way the Council have handled the UK Docks business on River Drive it would be safe to assume the last point is most relevant here.
END_OF_DOCUMENT_TOKEN_TO_BE_REPLACED

There is also an authorised drawing without any dimensions.

There was no agenda because the Councillor said at the TGA meeting he would find out if the structure was built to approved plans i.e. it was the only item on the agenda, as simple as that.
Some of us thought that because of the Principal Planning Officer’s silence on the matter the approved plans showed it was not built as planned.
No approved plans were produced at the meeting nor since by the Principal Planning Officer. However an approved drawing was posted on the Planning Portal (Drawing 8296/14) which showed that the structure was not only too high but confirmed that it was too wide as well.
It was because the Council would not tell the Residents what the dimensions of the structure were nor provide any approved drawing from 1996 that we had to call on the TGA.
I worked out the because the pillars were now vertical one could determine the width of the  footing laid in 2001.