Dear Monitoring Officer,
I have a complaint about the conduct of Councillor John Anglin re the Town Hall meeting 25-Nov-13.
A meeting in November 2013 with the Council was arranged by Councillor Anglin, about the height and width of the cover on UK Docks slipway on River Drive in South Shields and to get any evidence that it had been built to plan but we were told that it was compliant i.e. it had been approved and the meeting promptly moved on to speculation about further expansion of the yard.
We, the Residents were given to believe that the meeting was to be formal, and so it should have been: END_OF_DOCUMENT_TOKEN_TO_BE_REPLACED

Nothing was highlighted in the email to the monitor.
The emphasis in bold is to highlight the fact that there is no evidence to back up UK Docks/STC’s claim that the shed was approved. The only authorised documents show the shed to be nearly 3m taller than the approved height.

Dear Monitoring Officer,
I have a complaint about the conduct of Councillor John Anglin re the Town Hall meeting 25-Nov-13.
A meeting in November 2013 with the Council was arranged by Councillor Anglin, about the height and width of the cover on UK Docks slipway on River Drive in South Shields and to get any evidence that it had been built to plan but we were told that it was compliant i.e. it had been approved and the meeting promptly moved on to speculation about further expansion of the yard.
We, the Residents were given to believe that the meeting was to be formal, and so it should have been:

I believe the number of seats in the Town Hall Members Room is limited, so I would not anticipate having more that 4-5 committee members present. John and Audrey will also be there, along with Peter and possibly someone from the planning department as well. I would infer this will be a structured meeting and standard protocols and meeting ethics will apply.Chair of the Tyne Gateway Ass. to the Secretary, 20-Nov-13.

It appeared that there was no agenda for the meeting (one could say that there was none needed as the meeting had been arranged to determine whether the cover was built to authorised plans or not), there were no minutes taken (attachment 1) and no documentation provided to back up the claim that it met the second condition of the grant in 1996. It transpired that it did not; it was built without planning permission being both too high and too wide.
I made the point to Councillor Anglin that it had been built wider than planned but he did not even acknowledge my complaint (the drawings provided by the Council gave confusing messages regarding the height so I just mentioned the width). The meeting had not addressed any agenda regarding the plans and was moved away from whether is was approved or not, to a second possible application to build another shed bu the Planning Officer, Mr Peter Cunningham.
Councillor Anglin allowed this to happen and to complete the charade Mr Cunningham said we had requested the meeting when really we had not. Councillor Anglin had told the Residents he would go to the Council and get clarity:

Cllr A would like clarity on height and how measured, original drawings show height from back of site down to river as 12m – if incorrect information, Cllr A will go back with a vengeance. Minutes, Tyne Gateway Assn. 9-Nov-13.

We thought he would get no further with Mr Cunningham than we had in two months of trying and so accepted that we should attend a formal meeting to see what would happen. It appears we were outsmarted by the Council because the meeting was down-graded, no evidence was provided to back their claim that the cover was authorised and Councillor failed to achieve what he had promised the TGA he would do i.e. get clarity.
This ultimately lead to the Council misinforming the Local Government Ombudsman on two counts:
22 – told them a more senior officer checked the measurements when in fact it was I that told Cllr Anglin and and therefore the Council about the departure from plans;
23 – It decided the degree of departure from the plans – less than one metre – was “non-material.”*

I think it reasonable to say that the Councillor Anglin’s conduct over the meeting lead to a Senior Planning having to mislead the Ombudsman to hide the misconduct at the meeting of 25-Nov-13. I have tried to challenge him about this since but have failed to get a response.
Yours sincerely,
Michael Dawson

* In response to our Petition we were told: Apart from the width these dimensions are either entirely in accordance with the approved plan, or subject to such minor deviation that they are properly categorised as non-material changes. It was following queries raised in mid-January that that the plans were re-examined. We discovered that the overall width of the steelwork at ground level was shown as 12.2m on the plan, not 12.9m as previously understood.

Dear Monitoring Officer,
I have a complaint about the conduct of Councillor John Anglin re the Town Hall meeting 25-Nov- 13.
A meeting in November 2013 with the Council was arranged by Councillor Anglin, about the height and width of the cover on UK Docks slipway on River Drive in South Shields and to get any evidence that it had been built to plan but we were told that it was compliant i.e. it had been approved and the meeting promptly moved on to speculation about further expansion of the yard.

UK Docks have built a slipway cover on their slipway on River Drive 2.7m taller than planned. They have been allowed to do this because South Tyneside Council say that it is not taller than planned. They base this misrepresentation about the height on unauthorised drawings but if one examines the only authorised drawing from 1996 with a dimensions then one can see that it is more of a deception than a misrepresentation.
I have used the drawing, 8296/14, provided by the agents Agents, Maughan Reynolds Partnership Ltd because it was drawn in August 2013 and would have included any authorised amendments made since the approval given in 1996 and when work was restarted on the shed (cover or enclosure) in September 2013  . END_OF_DOCUMENT_TOKEN_TO_BE_REPLACED

When UK docks laid the footings for the slipway cover they made them for a structure with a footprint bigger than that for which they had permission. We do not know what was said between the UK Docks and the building inspector but we do know that the non compliance was not reported (or if it was, no enforcement action was taken). END_OF_DOCUMENT_TOKEN_TO_BE_REPLACED

There are two drawings that show a height for the landward end of the shed of 15.5m and neither were approved because it was a mistake made by the draftman in 1996. Why the Council do not hold a corrected one has never been explained but it matters not because there is one approved drawing from 1996 that survived and it is 8296/2

After the shortcomings of 1A, see below, were pointed out to the Ombudsman South Tyneside Council reverted to the use of 1B.

8296/2 is the only authorised drawing from 1996 in the Council’s possession with dimensions. The detail on the left hand side gives an approved height of the landward gable of 12.7m.

Even where these heights have been removed from the drawing as in the case of the copy sent to the Planning Office on day 2, one can still estimate the true planned height by using the gradient on the elevation of the shed. It makes the river end about 16m and therefore a landward end of about 13m. Not the 15.5m measured in September 2013. 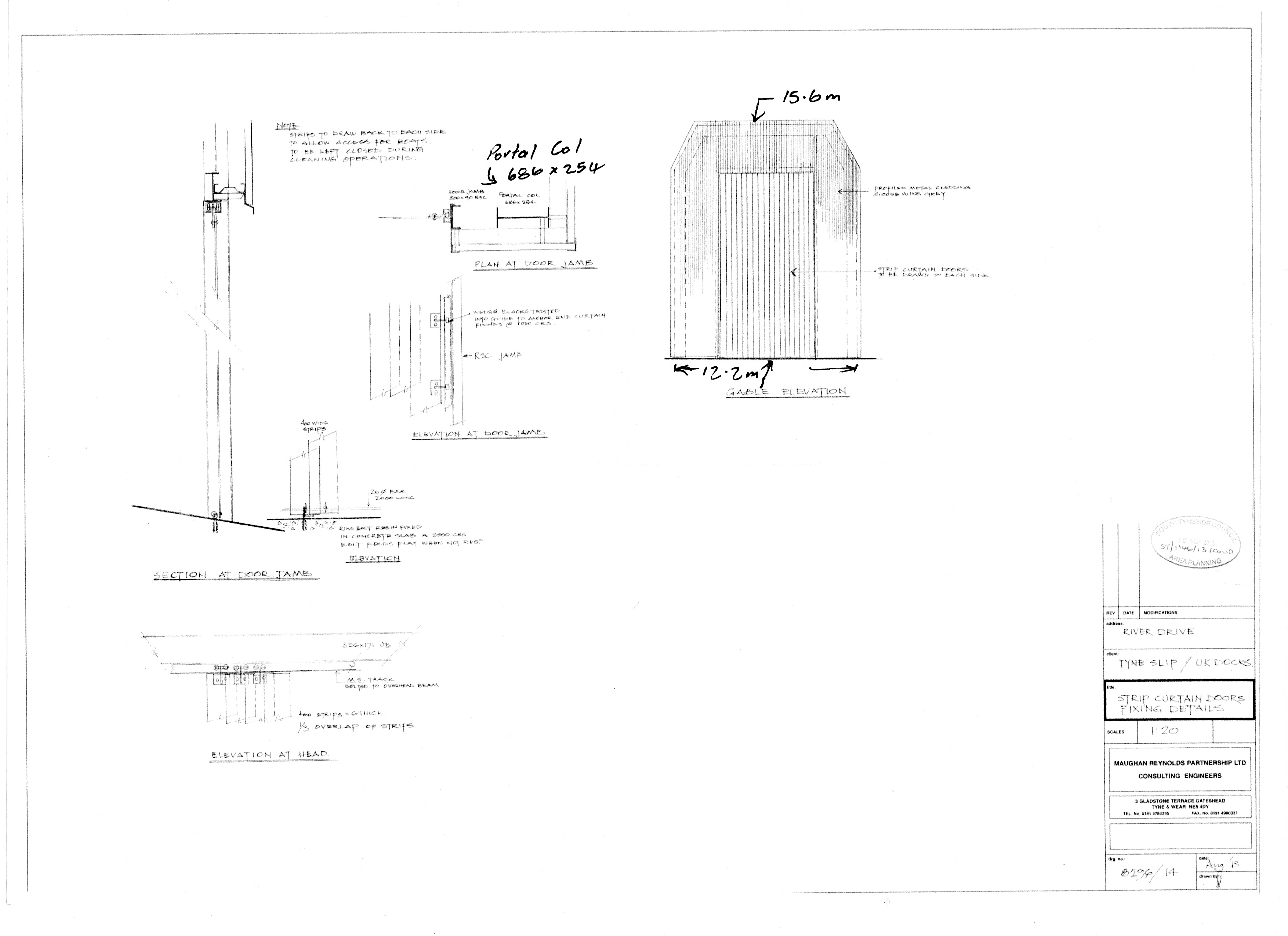 One should perhaps use this drawing rather than 8296/2 because it would have included any authorised amendments made since 1996 and was approved by the Council 14-Oct-2013.

It includes the change in angle of the sides. The main thing to notice is that the planned height of the landward end was not changed and remains at 12.7m, the gable end on the drawing being about 16m.

The drawings used by UK Docks and their promoter South Tyneside Council are either 8296/1A or 1B which are not authorised and both contain  the same fundamental drawing error.

Even without using a scale ruler on a full sized drawing one can see that the dimension at the landward elevation of the shed is wrong. The 3000, roughly a quarter of the whole, nearly half way to a mid point line, confirms this and three is a quarter of 12 not 15. 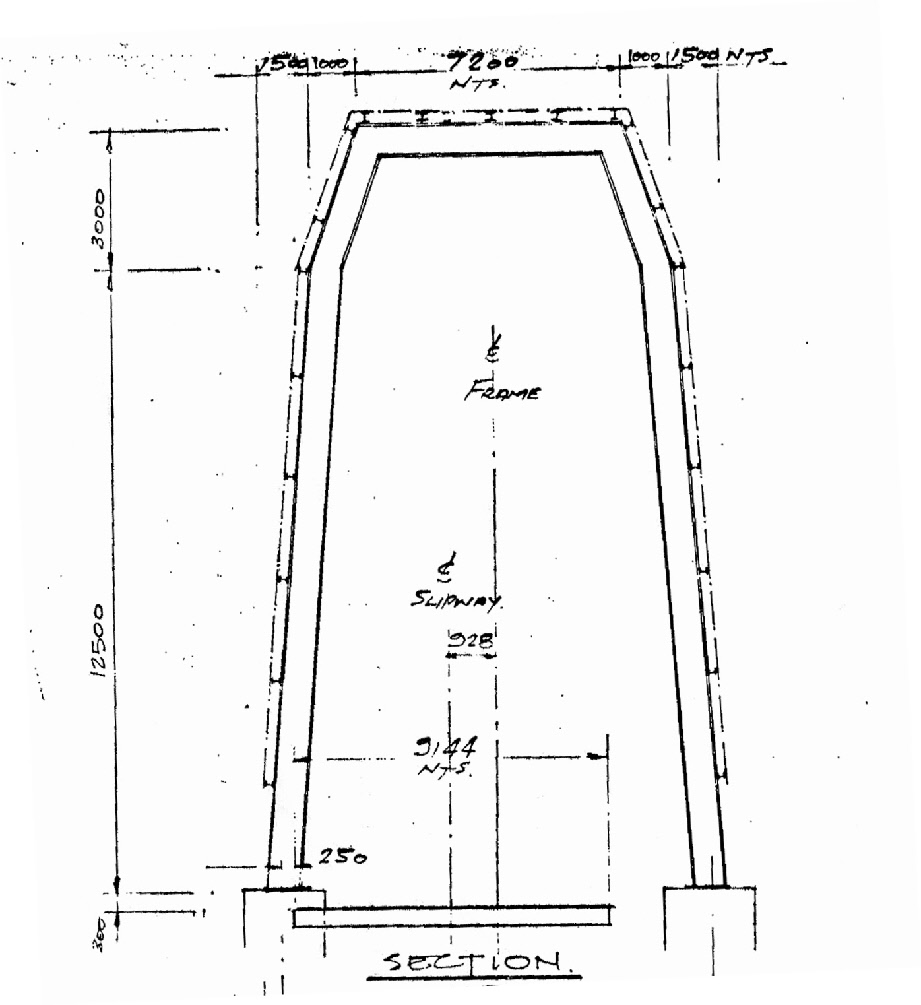 The first drawings seen did not show the true height of the river end.
If one looks at the top of either drawing one will see that the river end is shown as 15.5m as well and as there is a gradient (2.7m) between the ends and only one of them can reflect the planned height of the roof or the roof would slope downwards toward the river. It does not, so the landward end = 13.3m (river end – gradient) which agrees with the authorised drawing from 1996 – see 8296/2 at top.

Neither 1A nor 1B were approved and anyone who says or implies otherwise is intending to misinform; 8296/1B was an amendment made to 1A in 1997 and sent to the Ombudsman as an approved document from 1996 to compound the lie.