Dishonesty at the Town Hall

As the new Monitoring Officer for South Tyneside Council, I fear there is much that you may not have been told and here is some of the background leading to the Freedom of Information request.
If you read through the correspondence I had with Planning from the date of meeting 25-Nov-13 till mid February you will see that the Planning Manager eventually conceded that the shed was taller than planned, though it was not till 4-Mar-14 that I thanked him him for the concession: “Thank you also for confirming that the Slipway Shed is not built to the approved 1996 plans.The approved plans from 1996 give a height of of 12.7m but the Council maintained up till then that the height had been approved as 15.5m. The difference is the gradient between each end of the shed or 2.7m. If you look at the findings presented by the Ombudsman, 15-Apr-15, you will see that she has been misinformed by the Council: “The complainant says the shed is also 3 metres higher than it should be. The Council says it is not. There is no fault in how the Council decided the shed is the permitted height.
You can see for yourself the Ombudsman has been misinformed and my solicitor agrees, 26-Jan-16. This was in response to an email from Customer Advocacy 9-Dec-15. 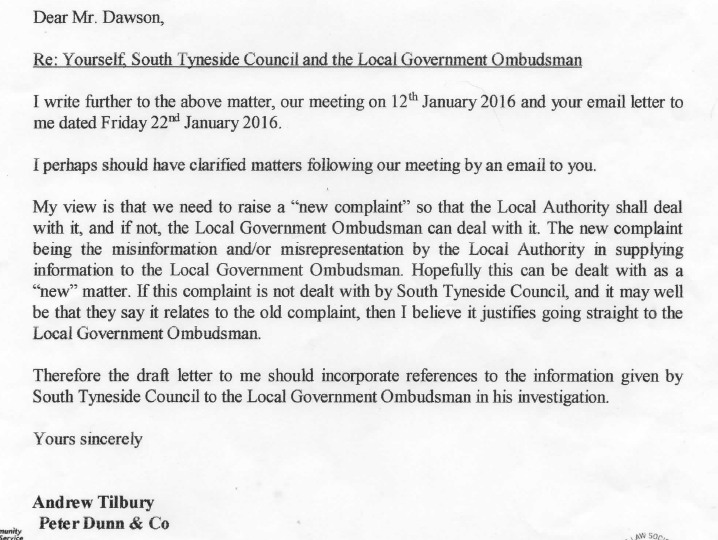 Actually I wrote directly to the Chief Executive asking him to raise a new complaint but it was never done.
Two months ago you were forwarded a copy of the email I sent to the MP for South Shields, ‘Dishonesty at the Town Hall’ which briefly summarised the current situation regarding UK docks. It would appear that the Council had been misinforming all enquirers about the shed for over six years and they managed to do this by avoiding the question, “What is the planned height of it?” and now UK Docks has conceded that it is too tall by telling people that the Council had given them retrospective permission.
Quite simply, the Council have not given them permission for the shed we now see and you can confirm that for yourself. I will try and explain how we have arrived at this inconsistency. It is actually very simple, the Council do not register a complaint for which they have no answer so there is no audit trail. This means they can ignore it, or worse, and by that I mean, they can answer it with a lie, and the best example of this is a complaint to the Chief Executive that the Council have misled the Ombudsman and the response: “There is no evidence to suggest that there has been deliberate misinformation provided by Council officers to the Local Government Ombudsman.
The response was not actually from the Chief Executive but from the Corporate Lead and the lie is there is that there no evidence. Misinformation of this kind is deliberate, especially if it is intended to deceive, and it should be noted that none of her bullet points stands up to any scrutiny.
I tried to warn Customer Advocacy about the deception being practised on behalf of the Chief Executive but the notice appears to have been passed back to the very person making allegations against me. See trail below, what ever way you look at it Alison has been instructed to make sure that my email to Michaela was ignored i.e. just chucked in the bin and Hayley Johnson was free to to do the same thing with my letter to her.
I would like it put on the record that the original complaint should never had got as far as Local Government Ombudsman as the Council had conceded that the shed was too high in February 2014. The Head of Development Services rigged the Complaints Procedure to reintroduce it so that it could be passed smoothly to the Ombudsman. He wrote a stage 2 response (253539) to a stage 2 (248789) which was never written.
The last email from the Council was an email from a Council Solicitor who repeated the three main misrepresentations given to the Ombudsman by a Senior Planning Officer.  I explained this to your predecessor in April and have received no response, presumably because I had left him with a choice between admitting that the shed was too tall all along and the Council had misled the Ombudsman or repeating the lie that they had not misled the Ombudsman.
I knew UK Docks had not applied for permission retrospectively and he was asked to confirm it in May but he did not reply to that either and that is why the Freedom of Information request has landed with you.
I think your predecessor has been most unfair in passing you the poisoned chalice when it should really have been passed to the Chief Executive.

One thought on “Dishonesty at Town Hall, 5-Dec-19”