This was a meeting arranged between the Head of Development Services and I to discuss the Agent’s Drawing produced in August 2013 to meet 4th Condition of the Grant of 1996. I had requested the meeting to illustrate to him that a slipway cover was not built to the planned height or to put it another way, the river end had a planned height of 15.5m rather than the landward end. The gradient between the ends is 2.7m

The Planning Manager brought two drawings to the meeting, 8296/1A and 8296/2. He did not bring the Agent’s drawing, 8296/14 so the meeting was a waste of time and after I told the meeting that 8296/1A showed both ends of the cover as the same height, it was effectively bought to an end.

Being nothing else to discuss and the meeting not being minuted, I told them instead, what I thought about UK Docks monopoly and corrupting influence of the Port of Tyne had over the planning decisions by the Council.

This was rewritten in September 2020 because the Council were reduced  to saying, Monitoring Officer, 27-Jul-20: “It remains the case that all complaints procedures relating to this matter have been exhausted both internally within the Council and externally.”  – instead of answering the question first posed in 2014 why, when the shed is 3m taller than planned, was there no retrospective permission requested or given.

Unfortunately (or fortunately, for some of the stuff I said may have been libellous) for me there was no agenda for the meeting nor was minuted but the Planning Manager wrote afterwards.

From: Gordon Atkinson
To: mick.dawson@theharbourview.co.uk
Cc: George Mansbridge; Ian Rutherford
Sent: Wednesday, July 09, 2014 12:34 PM
Subject: UK Docks [NOT PROTECTIVELY MARKED]
Dear Mr Dawson
Further to our meeting yesterday, I have gone through the disc and found the TWDC report from 1996, and now attach a copy. The only reference to the dimensions are in the paragraph I have highlighted on page 1. The height is said to be ‘approximately 15.5m high’ – I accept that there is no reference to whether this is the inland end, or the riverside end, but when read in conjunction with the drawing (8296/1A) it must refer to the inland end. There is no reference in the report to the height (or indeed any other dimension) of the proposal having been amended in the period between submission and approval by the TWDC. . . .
. . . I have also spoken to Jonathon Wilson who confirms that the dimensions of the proposal were not altered during the assessment of the proposal.
Regards
Gordon Atkinson.

Mr Atkinson was earlier responsible for introducing the discredited drawing 8296/1A which like 1B shows both ends of the cover to be 15.5m. The copy of 8296/2 that Mr Atkinson brought to the meeting would have confirmed a landward height of  less than 13m but I felt it was an inappropriate time to let them off with not producing drawing 8296/14 for analysis.

Mr Atkinson was well aware as everyone, including, Mr Wilson, that the roof is level so one of the gable end heights must be wrong and it is the road end according to either 8296/2 or 8296/14. This is reminiscent of the meeting arranged by Councillor Anglin some 7 and a half months before, where the Council were supposed to produce plans or drawings to show that the cover had indeed been approved. There was no agenda for the earlier meeting, nor was it minuted.

Most importantly, no valid drawings were produced at the earlier meeting and the only valid drawing produced for the second was 8296/2 and the only measurement given on it shows the planned height of the landward end to be 12.7m making the river end 15.4m (or 15.5m by reference to 8296/1A).

Mr Atkinson and Mr Mansbridge claim that the river end has a planned height of 18.2m and have deftly avoided examination of 8296/14

From: George Mansbridge
To: mick.dawson@theharbourview.co.uk
Cc: L B
Sent: Wednesday, July 09, 2014 8:21 PM
Subject: UK Docks [NOT PROTECTIVELY MARKED]
Dear Michael
I know that Gordon has already responded to you following his further review of the file and in particular the report by TWDC to their Board. I did however want to drop you a line just to thank you for your time yesterday. I fully understand that there are issues associated with the UK Docks development that you remain unhappy with however I did appreciate the manner by which to conducted yourself when we met; so thank you for that. We did not get an opportunity to talk about the letter you sent to my Chief Executive. My assumption is that you would still like his office to review this matter as a stage 3 complaint [in accord with our complaints process]. If that is not the case then please let me know and I will pass that information on.
Kind regards
George Mansbridge
Head of Development Services

I had already anticipated that this meeting was not for my benefit and wrote to the Chief Executive the day before:

Either way it became an alternative ‘fact’ that the cover is built to the ‘approved’ height because although I told Customer Advocacy that 8296/14 had not been tabled at a meeting specifically arranged to review it, they failed to take this into account. They did not address question of height of the cover at all in 4 pages of their response at Stage 3 and by that, had allowed the misrepresentation to go unchecked to the Local Government Ombudsman.

8296/2 was the drawing I referred to when I wrote and thanked Mr Atkinson for confirming that the cover was not built to the approved 1996 plans on the 4th of March 2014: 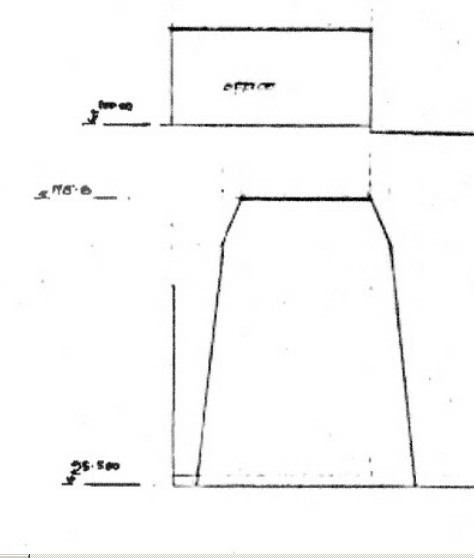 Remember 0.6 meters needs to taken off the height of 13.3m. The approved planned height is 12.7m.

This should have put a stop to the construction of the cover but it looked like the business needs of UK Docks/Port of Tyne were more important than usual planning considerations.

A Senior Planning Officer sent a copy of 8296/1B to the Ombudsman after I had explained to them the shortcomings of 8296/1A (there is no difference between 1B and 1A regarding their use in this respect) and the Corporate Lead says there is no evidence of deliberate misinformation being given to the Ombudsman.

The example above, the ‘Mansbridge Trap’, is the most refined example of the forward pass where a member of the Council gives out misinformation then passes you along the management chain. Mrs Johnson used simpler form of the same device when she passed me to the Head of Legal Services following her misrepresentation of the meeting. She said the meeting was about 8296/1A.

The first example of it happening to me was Mr Cunningham 13-Jan-14 who had declined to answer a complaint based on 8296/14:

The first example at all occurred on 9-Sep-13 when Mr Cunningham ducked a question about the planned height, “Has the revised height of 15.5metres been approved or is it in breach of the 1996 Planning approval?” He directed the enquirer to the complaints procedure.

One thought on “The Mansbridge Trap”