Is is best to view on a laptop or big tablet as the scale can be adjusted to represent an A4 page at 1:1 (make the width on the screen = 21cm).

At that scale the height at the halfway point becomes 5.2cm and the length 7cm.

There is no argument about the length of it which is 22m (between centres not overall, especially when the cladding is added).

The drawing is not to scale as the height of the middle frame, represented by the size on the screen is = 314.3×0.052m or 16.34m making it 0.5m different from the figure calculated from the heights given by the Council. A centimetre difference one could reasonably claim that the drawing was to scale but half a meter, never.

Again, adjust to represent on screen an A4 page at 1:1.

At that scale the mean or middle point of the elevation is 22mm from the top and the length is 34mm and again one can calculate the ratio of the real to the size on screen as 22/0.034= 647.1

We are now looking a slightly taller and longer structure because of the cladding he height of the middle of the side elevation on the screen is 647×0.022m or 14.234m making respective ends 12.9m and 15.6m

The drawing was quite accurately drawn to scale and however there was no need to go through this rigmarole to find the that the landward end of the shed should be a bit less than 13m because it shown on the drawing. Roof height (108.8m) – height at base (96.1m from 82691A or 1B) = 12.7m 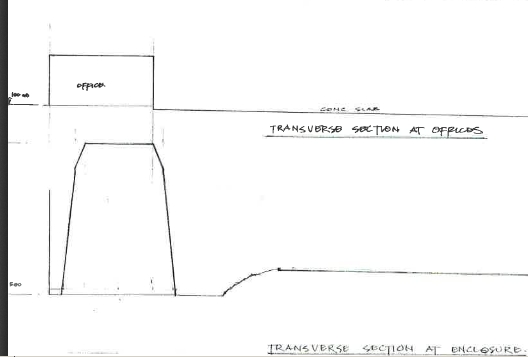 The cropped copy of 8296/2 was given to the planning officer, 6th Sepember 2013 and copies of it were emailed the to residents who were claiming that the shed was taller than planned.

The full drawing was retrieved by the Council within days from their archive but copies that showed we were right, were not handed round.

Someone in authority must have seen it because UK Docks were forced to stop work on their shed for 3 month.

I have a copy because I asked his manager for one at the next stage of the Council’s Complaints Procedure. That was four months later.

It was approved by the Planning Manager in October 2013

The first thing to notice is gable end is of the river end of the shed as the shuttering can be drawn aside to admit boats and they arrive on the slipway from the river. That the shuttering in use today folds horizon-tally rather than vertically does not matter but the fact that they built the shed taller and wider than planned does.

The detail of the door jamb and elevation head are indeed to a scale of 1:20 but while the gable end is clearly not, it confirmed that the architect had specified an industry standard for the size of for the columns and beams, 686×254mm.

The gable end is drawn to a scale of 1:100 but I did not know that in 2013 so had to go through a similar routine to those outlined above to show that the shed was nearly a meter wider than the width that had been approved by the Planning Manager a few weeks before and that his Principal Principal Planning Officer was lying when he said the structure had been approved.

I have replaced the JPG copy of 8296/14 with a PDF on the website to save one the trouble that I went through in 2013 to prove that the shed was nearly 3m taller than permitted. JPG images do not easily rotate.

If you navigate to http://theharbourview.co.uk/evidence/drawings/ and select 8296/14 Good copy:  Strip Curtain Doors Fixing Details you can see for yourself, that whoever told the Ombudsman that the approved height of the shed at the river end was 18.2m, to put it bluntly, was lying.

If you rotate the drawing 90° and enlarge the image until the beam over the shed door is about 0.7cm and measure the height to the top beam you will find it to be about 15cm. These translate to 686mm and 15.5m when you know that the drawing of the gable end was to a 1:100 scale.

I got it about right with the copy I presented to Planning Enquiries in January 2014 which explains why the complaint on which was based on it, was removed. It was removed because they, the planning office, were told to remove it by someone with power over them.

Someone who did not wish the second condition of the grant of 1996 to be enforced:-

“The development to which this permission relates shall be carried out in complete accordance with the approved plans and specifications.