When UK docks laid the footings for the slipway cover they made them for a structure with a footprint bigger than that for which they had permission. We do not know what was said between the UK Docks and the building inspector but we do know that the non compliance was not reported (or if it was, no enforcement action was taken).

We have had trouble with the shed being too wide since we were told that it was compliant ( or ‘legal’) at a Town Hall meeting in November 2013.  I then had trouble registering this detail with the  Council’s complaints procedure. Both the Case Officer and the Planning Manager said the framework had  been measured and that the width was either compliant or in accord  with the approved plans after I had sent in the complaint.
Mr Cunningham had measured the height and width of the structure in September but he would not tell us what he had found which was why we had reconstituted the Tyne Gateway Assn., which in turn lead to the meeting at the Town Hall and eventually to the Ombudsman. 1

I had asked the Council who was responsible for checking that buildings were built to plan but they declined to answer and referred me to the Ombudsman which did not answer the question. It appears that Mr Cunningham had measured the shed himself to keep building control out of the loop because they would have been duty bound to inform the enforcement officer. 2

Three years later I had similar problems when they used the 2001 footings for the sixth frame. UK Docks had apparently hidden the fact that they laid the extra set of footings from the Council for 16 years which is difficult to believe but is understandable when one realises that there is no-one responsible making sure that buildings are built to plan.
The expansion plans, which used the footings laid in 2001 were submitted by the agent, Gary Miller Associates and these were promoted by Planning Officer, Gary Simmonette in his submission to the Planning Committee.  As an exercise in ‘legalising’ the shed which had been built without planning permission this appears to have been extremely successful.

When I told Cllr Anglin, the Council and later the MP about this the Council told the MP that:  “The previous issues relating to the boat yard have in fact now been looked at by the Local Government Ombudsman (LGO) and they found no issue with the yard or anything relating to its development. Unfortunately, the Ombudsman’s decision cannot be re-visited.” 3

The sixth set of frames, assembled August 2017 were lifted onto the footings laid in 2001 without planning permission. The Ombudsman’s  decision which over looked the fact that shed was 2.7m taller than planned, was published on 15-Apr-15.

Check the only authorised drawing with heights, and you can only agree that to say that the shed has been approved is a lie. If you read the Ombudsman’s findings that cover the height and in particular #34:

34. I have seen the 1996 plans. On plan 1/B the applicant has written the proposed elevations at the inland end as 12.5 metres plus 3 metres. Mr Dawson says the Council should not have taken the applicant’s word for this. The planning authority has to consider what an applicant applies for; it can grant or refuse this but it cannot make an applicant submit something different. This developer applied for a shed 15.5 metres high at the land end. The Tyne and Wear Development Corporation as planning authority approved this. The current Council had to accept this as the approved height.

Neither 1A nor 1B showed any indication that they had been seen by the Tyne and Wear Development Corporation but 8296/2 does, and it bears their stamp of approval. 4
It would appear that the Council are perpetrating the fraud, started by UK Docks, that there was approval for the shed, as it stands today, so that they do not have to take enforcement action. As one can see it fails not only in height and width but in length as well.

1. Denial about the extra width and Referral to the Local Government Ombudsman. The public meeting was arranged after the Planning Manager had conceded to our view on both the width and the height. The important point in this email is where I thank him for confirming that the Slipway Shed is not built to the approved 1996 plans meaning drawing 8296/2. The other approved drawing, 8296/4 has no dimensions.

2. No checking for compliance with the approved plans as it appears no-one is responsible.

3. The footings used for the sixth frame were laid in 2001,  the Ombudsman published her final draft on April 15th 2015 (based on the misrepresentations sent to them by a Senior Planning Officer) and the Agent submitted revised  plans late in 2015 (with a closing date for comments July 7th, 2014?) and the Committee  granted permission on  February 2nd 2016. They were advised about the sixth set of footings in August 2017 and did nothing, claiming  they will only address new issues. 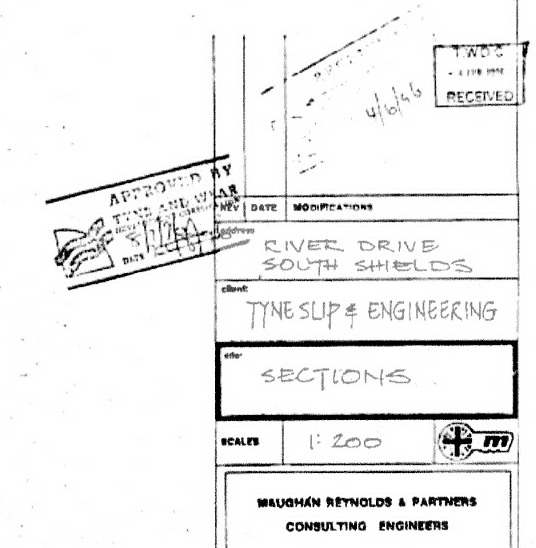