8296/1B was one of a pair of drawings given to the Principal Planning Officer, Mr P Cunningham on the 6th September 2013 by UK Docks.

They used the second of the drawings, 1B to claim, falsely as it turned out, that height of the road end was approved at 15.5m. The Principal Planning Officer used both 1A and 1B, and the Planning Manager preferred 1A for this claim. The council are not specific about which one they are using when they misinform enquirers over the phone.

The first is a cropped version of an authorised drawing that gives the planned height of the shed at the landward end of 12.7m (roof top, 118.8m – footing height, 96.1m). Without this information one can still work out the planned height of it, from the gradient and the longitudinal section, and it confirms the river end as 15.5m which is not what UK Docks and the Council claim. 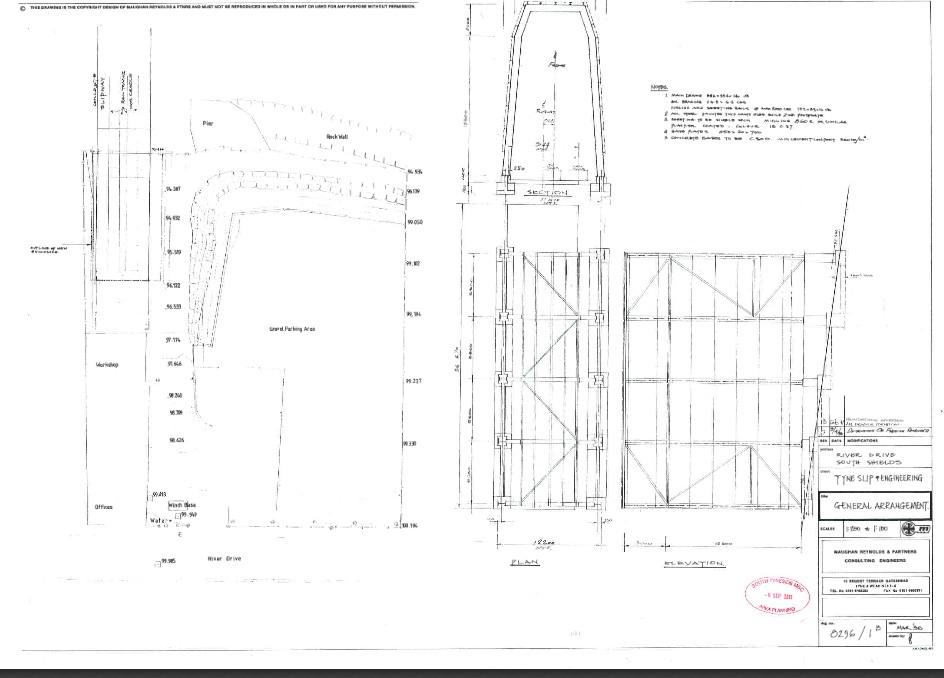 The first thing to note about the second drawing is that it has not been authorised or approved. The second thing is that the section, top centre, is the river end or bottom end of the slipway and has a height of 15.5m.  The third thing to notice is the River Drive end (upper end of the slipway) is also marked as 15.5m, a mistake – see figure-1. because both ends cannot be the same height or the shed roof would slope down towards the river.

If one is not satisfied with the explanation given in figure-1 because 8296/1B is not approved then one can examine the full copy of the top drawing which has been authorised – 8296/2.

When one tries to point out to either the Council or UK Docks that the cover has been built 3m taller than planned they disagree saying that the approved landward end is 15.5m.

The Council used 1B to mislead the Local Government Ombudsman, failing to tell her what the drawing actually means .

There is no evidence of fault in the way the Council dealt with the breach of planning control and its decision not to take enforcement action. It kept residents informed throughout the process. The complainant says the shed is also 3 metres higher than it should be. The Council says it is not. There is no fault in how the Council decided the shed is the permitted height.

The Council now tell any enquirer, including MPs etc, because one assumes that a Council would be honest with the Ombudsman:

This matter has been investigated fully by the Council through its corporate complaints procedure. The complaint was not upheld and was also considered and decided by the Local Government Ombudsman who found no fault with the Council’s decision.

One thought on “Using 1B to Misinform”