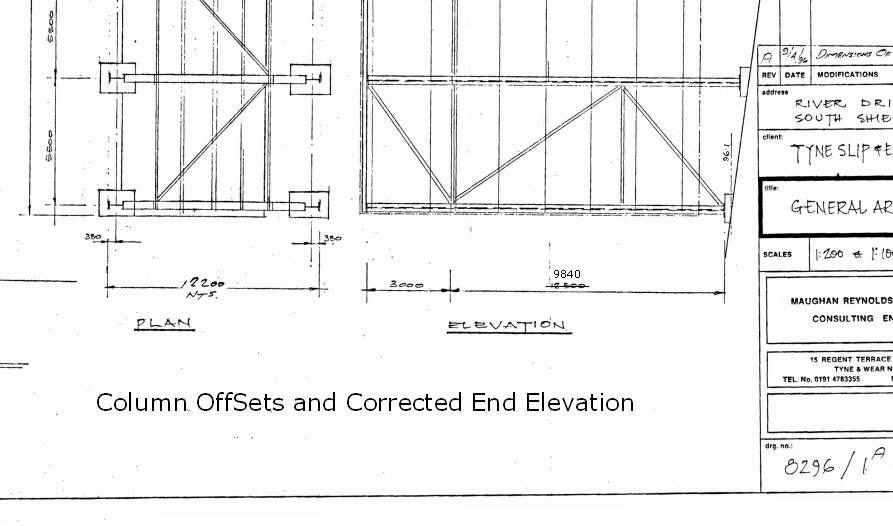 No doubt many of you will have received the leaflet “Plan your Borough…” and it appears that the SAFT site is up for redevelopment again. Site ISS4 includes the Furniture Factory, Boat Club and UK Docks and stretches almost the whole length of Greens Place – enough for three rotundas.

This should be of worry to more than the few in Harbour View and the top end of Greens Place because of the “Shed” which the Council have allowed to be built without planning Permission. The shed has been built 2-3 meters higher than the plans allowed and this will set a precedent for speculative developers especially with the Marine School tower at the other end of the site.

Now is a good time to remind you all that two sets of plans were submitted to the Council for it. The first was by UK Docks to the Case Officer. These 1996 plans show both ends of the shed to be 15.5m high which cannot be true as there is a gradient of 2.7m. They appeared to have convinced the Council that the road end was the correct height because the frames were allowed to stand. The second set of plans were produced in August 2013 by the Agents and sent for approval to the Planning Manager to meet a condition that the doors must close properly to prevent emissions. These plans show the river end to be 15.5m and these were the plans that I used to get a consession from him that structure was not approved i.e. built without planning permission. Note that this confirms the use of the 1996 plans to show a road end height of 15.5m to be invalid and probably fraudulent.

When Mr Mansbridge wrote to us all, May 2nd 2014, he reverted to the use of the 1996 plans to claim that the shed was built to the approved height. He also got round the fact that the increased width, of nearly a meter, was not material as well by claiming that they had initially thought that the overall width was 12.9m and the shed was only 20cm wider than planned. Anyone can see that this is a fiction and I have attached a detail from the 1996 plans to show you what I mean. He did not attach any drawings to his letter!

He had no excuse to use the 1996 plans in this way because I had written to him earlier about a front page article in the Gazette:

To cap it all there was an artical in the local paper on Apr 1st showing most flattering photograph of the offending shed saying that it was only 36ft high. The author of the article may have got away with saying that in September but not now. You should know that it is over 50 ft high and that is what we have been saying for months now. It’s planned height is about 42ft.

This is why I have copied the Gazette in – I think we need a correction printed on their front page if nothing else. I do not think we will get an apology from Mr Mansbridge. Here is a link to the most relevant piece of correspondence I have had with the Planning Office if any legal experts want to question what I have said.

2 thoughts on “Misinterpretation of plans by STC 1”