As I said in the covering email the first thing I have noticed when updating the timeline was that UK Docks had stopped working on their shed in mid September 2013 and did not seriously restart until the huge cranes reappeared in January 2014. Three months is a long time and they would not have stopped unless a ‘Stop Notice’ had been issued.
I have put ‘Stop Notice’ in bunny’s ears because there may have been nothing in writing, just a Gentlemen’s Agreement: if it was only a meter wider UK Docks would have told the Council to get lost but they knew their shed was going to be nearly three meters taller than the one for which they had permission and they did not wish anyone to look closer at the plans because they needed a longer shed as well as the footing laid in 2001 indicated and to rebuild it to correct height was not on, and that was why the pair of drawings were given to Mr Cunningham by the UK Dock’s representative, stamped on the 6th September and forwarded to us, as a pdf document:-

The Principal Planning Officer, Mr Cunningham had refused to answer your question, 9-Sep-13, Has the revised height of 15.5metres been approved or is it in breach of the 1996 Planning approval? One can only conclude that the answer was that it was in breach of planning approval as UK Docks did stop work on their shed, as reported on 23-Sep and 3-Oct-2013.
They were in a fix because they had passed a set of plans which falsely claimed, the height had been approved, on the 6th September to Mr Cunningham and unfortunately he had passed them to us when he implied the shed bad been approved in his emails to you.
The first was a cropped copy of an approved drawing from 1996, 8296/2: 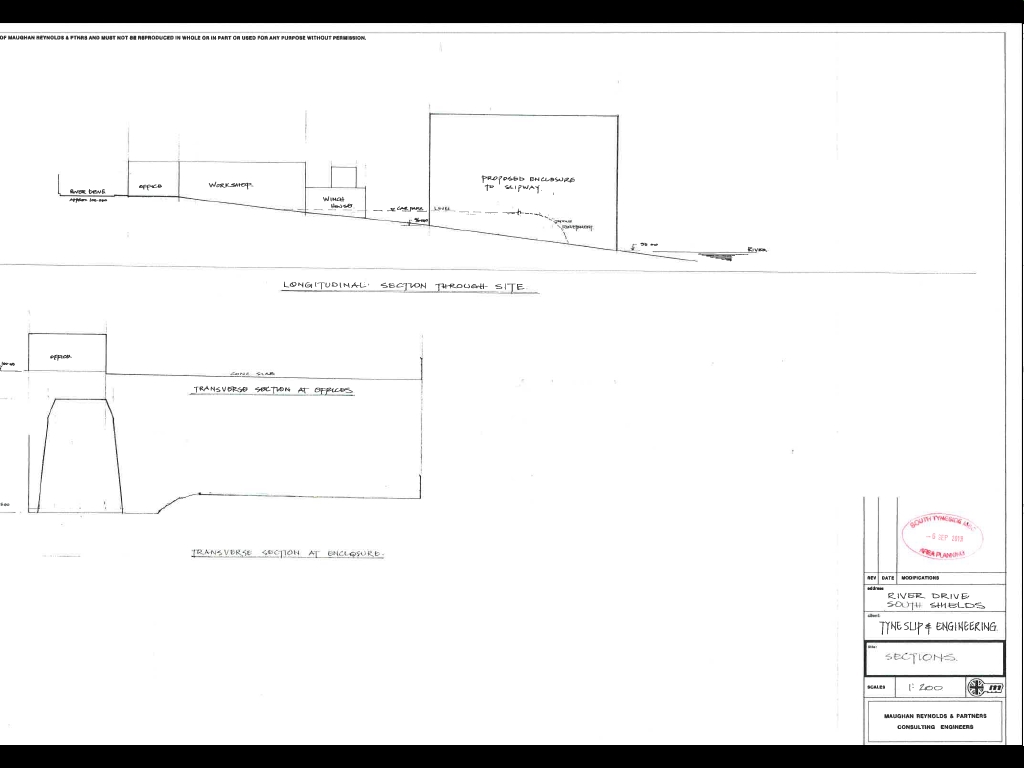 You will notice that the dimensions are missing from the left hand edge and drawing number from this one. Neither UK Docks nor Mr Cunningham realised that we could prove that that they were being deceitful when they told us the shed had been approved. It is very easy and one can calculate the planned height because we know the difference height between each end was 2.7m. The heights on the A4 print shown; are 3.05cm and 3.70cm which give by ratios, 12.7 and 15.3m.

The second was an amended copy of 8296/1B, made in February 1997. It was ambiguous in respect of height as it gave both ends a height of 15.5m: one must be wrong as you can see from the drawing above. It tells us it was the one at the landward end. Any claim it was the approved height is 15.5m is therefore fraudulent. It was not ambiguous about the width which was given as 12.2m. The missing dimension at the landward end of the shed is 12.7m. It was therefore a fraudulent misrepresentation for UK Docks to claim it was 15.5m.

Mr Cunningham would have saved a lot of trouble if he had sent us the full authorised copy but it would have meant that UK Docks would have to find another slipway for their shed or apply retrospectively for permission to complete it and neither happened.

Mr Cunningham did not answer your question, he remained silent and referred you to the complaints procedure and as you will see they have tried and tested method of manipulating it to hide bad planning practice, the lack of building control and any hint of corruption. The process ends with a referral to the Local Government Ombudsman and they are easily conned.

We thought that with the resurrection the Tyne Gateway Assn (TGA) we might get some truth but that failed because it got taken over, with Councillors Anglin’s and McMillan’s help, by Messrs Watson and Haig who failed to declare their interest in UK Docks.
It matters not whether the Councillors were aware of this but it sufficient to know that Mr Haig as Treasurer never published any accounts and more importantly, Mr Watson as Chair has not published a single Annual Report report was elected Chair in 2013.
There was, however, one good thing to come out of the TGA and that was that one could rely on the minutes, while they they were never published there was a limited circulation amongst committee members and the copy for 25-Nov-13 is still relevant:

KH advised that they had seen the plans which were date stamped 1996, the structure is 15.5m. Proper drawings were on file and there is nothing illegal about the structure.
KH advised that PC was honest and fair. With regard to conditions 3 & 4, these related to cladding of the structure, initial drawings showed blue cladding, which was agreed.

KH or Ken Haig, was referring to the Town Hall meeting of the same date and while I can confirm that Mr Cunningham did not use the expression ‘legal’ to mean approved because that would have been fraudulent misrepresentation but he did not correct Mr Haig for its use.
When Mr Haig said that Mr Cunningham was honest and fair you can see that both were being a little economical with the truth. As I have shown above the plans may have been date stamped 1996 but they were not approved. If any approved drawings were produced at the meeting, they would have shown that the shed was 3m too high and the minutes of the TGA reflected this and that was why UK Docks got permission to restart work on their shed.

There were no minutes of what went on at the Town Hall and Cllr Anglin wrote, 1-Dec-13: Michael, I took no minutes as is customary at these informal meetings. For your record I am sure all would agree. The Exec representatives of the Group accepted that the construction had been made legally as per drawings seen.

It looks like he had faithfully reproduced the view given by Mr Haig to the TGA committee a week earlier. I knew that we had been misinformed and wrote to Councillor Anglin to advise him on this point. 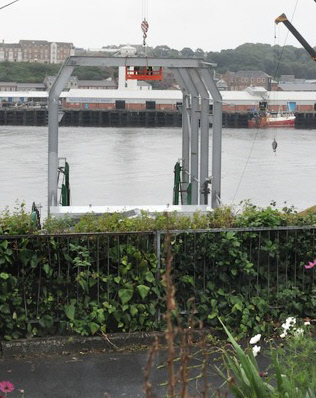 It had been reported at an earlier meeting, 9-Nov-13: Residents believe the building being constructed is wider and higher than approved, and I went and measured the width for myself, which could be done without troubling UK Docks, by sighting along the pillars and putting chalk marks on top of the conveniently placed railings.
The biggest problem I had was that they were not square with the frames and there were 5 of them when I got round to measuring it which did not help with parallax errors. The fence was not straight either and that required a plumb line and builder’s square to make the adjustment but in the end I could claim that the shed was a meter wider than planned (13.2m) with an accuracy < 1%.

Not only were Messrs Cunningham and Haig misleading us about the height, they were lying about the width as well and it appears they were relying on the fact that there were no minutes to record the fact that no approved drawing was presented to back their claims. There are none, both the approved drawings show the shed is just under 3 m taller than permitted.
Simply put, there is no drawing in existence that backed UK Docks’ or Mr Cunningham’s view, that the structure was the approved height. There are 2 that confirm the approved height to be 12.7m and not 15.5m at the landward end of that shed and they are 8296/2 and 8296/14 and the use of the latter is to be preferred because it shows the shed to be a meter wider than planned.

Planning had recovered 8296/2 in September and the Council had published the drawing attached to the Decision Notice ST/1146/13/COND, 8296/14, in mid December. It had been approved by the Planning Manager in October 2013, and thanks to Julie for pointing out its provenance. The Wilsons had possibly not told their Agents that they intended to erect a shed 3m taller than the one for which they had approval but more to the point Maughan Reynolds Partnership Ltd could never have superseded the previously approved plans in terms of defining the dimensions of the approved development and the Council knew that. No-one has ever disputed the note about the height!

The responsibility of managing the complaint, that the shed was taller than planned and the Council had done had nothing about it, had gradually passed from you to me and it may be best to put a date on it and I suggest it should be the Town Hall meeting on the 25th November 2013. I think you were unavailable and I was determined to be there as a witness if nothing else. It was also obvious that we had moved into second stage of the Council’s Complaints Procedure.

I was wary of raising a formal complaint because, as you can see, we were in the second stage of one. What you had done in September 2013, was to point out that we knew, as well as UK Docks and the Council, that the shed was taller than planned and that they were being evasive.

When they restarted work after the Town Hall meeting, I was left with no choice but to repeat your observation and ask, 10-Jan-14: As the applicant has not discharged condition 2 why is there no retrospective planning application?

So that there was no confusion about which end of the shed had a planned height of 15.5m the complaint was based the drawing attached to the Decision Notice which had been approved by the Council in October, a month before the fateful meeting. My complaint was addressed to Planning Enquiries but intercepted by Mr Cunningham who simply referred me back to the TGA.

It had become clear that both the Cllrs, Anglin and McMillan and Mr Cunningham, wished to hide the truth about the shed and they were ably assisted by the HB Hydraulics men. I had no trust in Mr Haig and I certainly was not going to deal with his procurement officer, Mr Watson.