Dear Chairman of the TGA,

Please cast your mind back to the meeting at the Town Hall on 25-Nov-13, the one arranged to determine whether UK Docks slipway shed had been built to plan, you were Chair of the Tyne Gateway at the time. Opinion was divided at that time into two camps, the first being those that said it was ‘legal’ meaning it was built to approved plans and those that did not.

Those that did not, had worked out from the few documents provided by the Principal Planning Officer, Mr Cunningham that it was about 3 meters too high – figure 1, and I shall return to that but before that I need to establish the order true order of events at that time regarding the width of the shed.
PDF copy for download

I am now being accused of trying to rewrite history when in fact it is the Council that have been doing that for some time, see my email to one of the Council solicitors. The email goes on to describe another informal meeting that should have been ‘formal and structured’ to quote yourself. Meetings that decide the fate of inappropriate developments should definitely stick to the agenda or explain why items have been dropped. Meetings become pointless if the they leave the reason for it off the agenda and there is not a secretary to record it.

The most relevant paragraph of that email that concerns me is:

While we were told before the meeting that the shed was 15.5m at the road end we were not advised about the width so I went and measured it myself from Greens Place a couple of days after the meeting and found it to be 13.2m wide and reported this to the members of the meeting, email to Cllr Anglin, that we had been misinformed by planning officer Cunningham.

May I remind you that the residents had asked for the TGA to be resurrected because the Council were stonewalling us. Item 6, AGM 9-Nov-13:

Residents believe the building being constructed is wider and higher than approved.
Many residents have been in contact with the Planning Department by telephone, email and in writing, with no response – now feel they are being ignored.

and may I remind you again from Item 3, minutes of Committee Meeting, 15-Nov-13:

Confirmation has been received from Planning Department that height of structure is 15.5m measured from point above foundations to road landward side.

We heard later that the measurements were made on 17-Sep-13 but the confirmation about the width being 13.1m was missing and it was not until the end of January that we actually got confirmation. I found it to be 13.2m and told the attendees, via Cllr Anglin that we had been misinformed by Mr Cunningham when he said the shed had been approved. Cllr Anglin confused the issue by saying the shed was ‘legal’.

I looks like Mr Cunningham had taken on the job of the building inspector to hide the fact that it was a meter too wide from the enforcement officer and that is why the shed is still there. If he could confirm the height as 15.5m he surely could have confirmed the width as 13.1m. I managed to be only 10cm out and I was over 50m away.

What Mr Cunningham did not realise was that the gradient gave scale to the any drawing and showed that the river end was 15.5m rather than the road end and the shed was 2.7m too tall.

It looks like the meeting on the 25-Nov-13 was arranged to cover up both breaches in planning control and Mr Cunningham’s and your responses my emails following the meeting only go to confirm that assessment of it.

Before you go ranting on about conspiracy theories remember it was you and Cllr Anglin who decided to change the agenda and effectively gave control of the proceedings to the Council. Remember also that it was I, that made public for the first time, the breach in planning control regarding the width and that Mr Cunningham subsequently denied it, and so had the Planning Manager. A little ‘timeline’ would help here:

What a Senior Planning Officer told the Ombudsman:

22. A more senior officer checked the measurements; he found the width at ground level was just less than one metre wider than the permission allowed. The Council decided the developer had not built the shed entirely in accordance with the approved plans and so had not met condition 2. The Council decided this was a breach of planning control.
23. The Council considered the difference between the permitted width and the width of the built shed and decided not to enforce. Enforcement is discretionary and the Council explained to residents in great detail how it reached its decision. It explained the law and policy it considered. There is no need for me to repeat this. It decided the degree of departure from the plans – less than one metre – was “non-material.”

Confused about the shed being too wide, don’t worry the height is much simpler. It was significant that we came away from that meeting without any evidence to show the rest of the committee of the TGA, or the rest of the world for that matter, that the shed’s height had been approved.

When we came away from that Town Hall meeting I was put in a very bad place by Mr Haig when he said to the TGA committee six hours later, TGA 25-Nov: KH advised that they had seen the plans which were date stamped 1996, the structure is 15.5m. Proper drawings were on file and there is nothing illegal about the structure.

I knew that that what we had seen was not approved or we would have come away with a copy of it and I had, either to call both you and Mr Haig to account or remain silent.
Two days later I went and measured the width for myself and two weeks after that, 8296/14 was published and there was no longer any need for me to remain silent and I have been collecting the scalps of all those that say the the shed is approved or legal ever since and I am happy to say they can all blame it on Messrs Anglin, Cunningham, Haig and yourself. Judging from the way the meeting went I would select Mr Haig as the leader, he had most to gain being a director of HB Hydraulics. 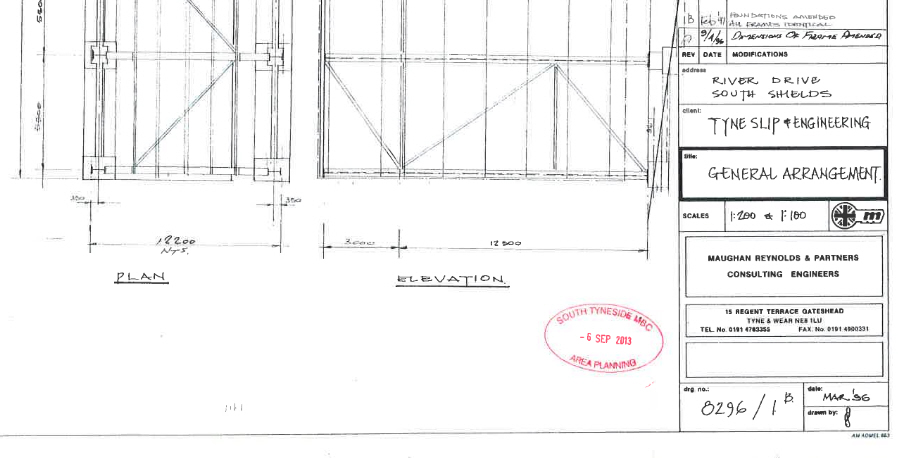 Elevation: the centre of the dimension is about where the 1 of the 12500 is and the 3000 finishes about half way to that or a quarter (3 is a quarter of twelve, not fifteen). The 3m should therefore be included in the 12.5m and not added to it . The road elevation is about 12.5m or more correctly 12.8m (15.5m less the gradient of 2.7m) and will be to the end of time, regardless of what South Tyneside Council tell the Ombudsman. Note that this drawing is an amendment to 1A made in Feb 1997. It is the drawing that was presented to the Ombudsman by the Council. I presented 8296/14 which includes a scale drawing (1:100) of the river gable end which is 16m tall.