Thank you for responding to my complaint about this.

I might be useful if I summarise my correspondence with Cllr Angela Hamilton and the MP for South Shields for those that have not been party to it and remind you the attendees were; Cllrs Anglin and MacMillan, Principal Planning Officer (Mr Cunningham), Chair and Treasurer of the TGA and myself.

It appears that whatever his intentions were, when Cllr Anglin promised to get some clarity, as to whether the shed had been built to plan or not, he completely failed to do so. We went to the meeting he arranged at the Town Hall expecting either, to come away with approved plans that showed we were wrong in our assessment the the shed was too wide and too high, or a concession that we were correct.

We came away with neither and it appears that this was the hidden agenda of the all at the meeting apart from myself as you can see from the correspondence with Councillor Hamilton and the MP for South Shields.1 There are no approved plans to back UK Dock’s and the Council’s view that it was built to plan i.e. there were no breaches in planning control.

While we were told before the meeting that the shed was 15.5m at the road end we were not advised about the width so I went and measured it myself from Greens Place a couple of days after the meeting and found it to be 13.2m wide and reported this to the members of the meeting, email to Cllr Anglin, that we had been misinformed by planning officer Cunningham.

The responses to this email were from the Chairman of the Tyne Gateway Assn, Graeme Watson and the Planning Officer, Mr Cunningham asking how I had gained access to the site. Cllr Anglin did not even acknowledge receipt of it.

We know that the site was measured on September 17th and that the width was a material variation from the plan from the Council’ response to our Petition in May 2014 but it was denied by firstly at the meeting then subsequently by Mr Cunningham 20-Dec-13 and by his Manager 15-Jan-14. It was not until the end of January that we were told that it was nearly a meter wide than planned.

I chased this all the way through the complaints procedure until it got to the Ombudsman who was told it was not a material consideration:

22. A more senior officer checked the measurements; he found the width at ground level was just less than one metre wider than the permission allowed. The Council decided the developer had not built the shed entirely in accordance with the approved plans and so had not met condition 2. The Council decided this was a breach of planning control.

23. The Council considered the difference between the permitted width and the width of the built shed and decided not to enforce. Enforcement is discretionary and the Council explained to residents in great detail how it reached its decision. It explained the law and policy it considered. There is no need for me to repeat this. It decided the degree of departure from the plans – less than one metre was “non-material.”

The planners still denied the breach in planning control after I has raised the complaint (10-Jan-14) and overlooks the fact that the Council were still in denial about the width four months after the frames went up. The breach of planning control was uncovered in September 2013 and UK Docks should have at least been asked to put things right there and then. This was purely an issue between UK Docks and the Council, no involvement by the residents was needed at all.

It appears that the Council were using the Ombudsman to rewrite history. Reading between the lines most of us reckon they could have got away with a wider shed but not a taller one and this brings me to your acknowledgement of my complaint against Cllr Anglin. 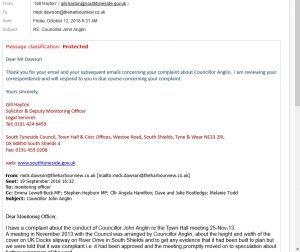 I do not thank you for encoding this, I had to download special software, Egress Switch to read it. I can only assume that you have been instructed to do this to close down the issue of Cllr Anglin’s misconduct.

Secondly I have it on no lesser authority than Customer Advocacy that [PROTECT] is just used internally by the Council.

I normally associate its use with the Council clouding an issue by passing misinformation, for example see below, and I was discussing the height of the shed with the Planning Manager at the time:

Dear Mr Dawson
Your email to Mr Atkinson has been forwarded to our team as your complaint on this matter has exhausted the Council’s complaints procedure and is now with the Local Government Ombudsman’s office.

Mr Atkinson’s email to me contained two items of misinformation that I was trying to correct.

The meeting was arranged specifically to view 8296/14 with Mr Mansbridge and it was extremely relevant as I had based my original complaint and what I told the Ombudsman using it. Neither he nor Mr Atkinson brought it to the meeting. The[y] brought 8296/1A and 8296/2 to the meeting and the first thing I did was to point out to them that 8296/1A showed both ends of the shed as the same height which was probably why it was never approved. This effectively bought the meeting to end. We did not see 8296/14 and I had informed Customer Advocacy of this before the stage 3 response was completed and certainly before Mr Atkinson asked Customer Advocacy to reply on his behalf.

Shades of the meeting currently under discussion? The second misrepresentation was that it was produced after the frames went up when in fact it was produced the month before. If you take a look at the drawing you can see for yourself that it is dated Aug/13. Please see attached D8296_14n.pdf.

If you can persuade one of the planning office to produce the A1 copy of 8296/14 you can measure the gable end for yourself and see that it 16cm high and the beams and columns are 0.7cm which on a scale of 1:100 represents an elevation of 16m supported by standard 685 x 245mm joists. This completely contradicts what a Senior Planning Officer told the Ombudsman:

34. I have seen the 1996 plans. On plan 1/B the applicant has written the proposed elevations at the inland end as 12.5 metres plus 3 metres. Mr Dawson says the Council should not have taken the applicant’s word for this.

Incidentally 8296/1B can be interpreted like 1A but it is dated Feb 1997 and if one carefully examines either of these two drawings it becomes abundantly clear that the 3m should be included in the 12.5m if one needs to get some idea of the approved height of the structure.

If you have any doubt about what I am saying about the planned height of the shed please take a look at an authorised copy of 8296/2 and on the left hand you will get confirmation that the shed is 2.7m taller than planned and again this breach of planning control would have been uncovered on the 17th September 2013 had the Council the will to do it.

It became apparent as soon as the planning officer started speaking at the first Town Hall meeting that he had no intention of discussing whether the shed was in breach of planning control and he was not brought to account. I tried but he told us that there was no breach.

I anticipated that the second meeting would be no better than the first and was somewhat better prepared in that I wrote about 8296/14 to the Chief Executive (Stage 3) the day before:

On 27th Sept an application was received in the planning office from the agents for UK Docks, Messrs Maughan, Reynolds Partnership Ltd to meet conditions of a previously granted application ST/0242/96 for a slipway shed length 22.3m, width 12.2m and height at end facing River Drive 12.5m.

The respondent, Michaela Hamilton does not mention the height at all in her response and especially not the breach and it is significant that she attributes the ‘not to scale’ comment to Mr Mansbridge. If the Planning Manager had brought the drawing 8296/14 to the meeting I would have been able to show Mr Mansbridge that it was drawn to scale. Whether or not it would have stopped the Senior Planning Officer telling Ombudsman that it was not drawn to scale is another matter.

So thoroughly did I discredit 8296/1A with the Ombudsman that the Senior Planning Officer presented the virtually identical drawing 8296/1B in its place. 1B (1997) was the drawing sent to us as the supposedly approved drawing we had seen at the meeting arranged by Cllr Anglin in 2013 when the shed was just a few girders.

1 Type Cllr A into search – http://theharbourview.co.uk/

2 All drawings can be viewed on the home page of – http://theharbourview.co.uk/evidence/

One thought on “Cllr A: Dear Gill Hayton”